There are many different styles of Solomon Island War Clubs. They vary in style and shape depending on the region/tribe they come from. This article is an introduction to the different types of Solomon Island war clubs and Melanesian war clubs. It has images to help readers identify where a war club comes from.

Solomon Island War clubs are quite beautiful in their own right and are highly collectible. They are not just collected by militaria enthusiasts but by collectors of antique tribal art.

I buy Solomon Island War Clubs and Polynesian war clubs so if you have one to sell I would love to see it. If you just want to know what your Solomon Island war club is worth please feel free to send me a Jpeg. 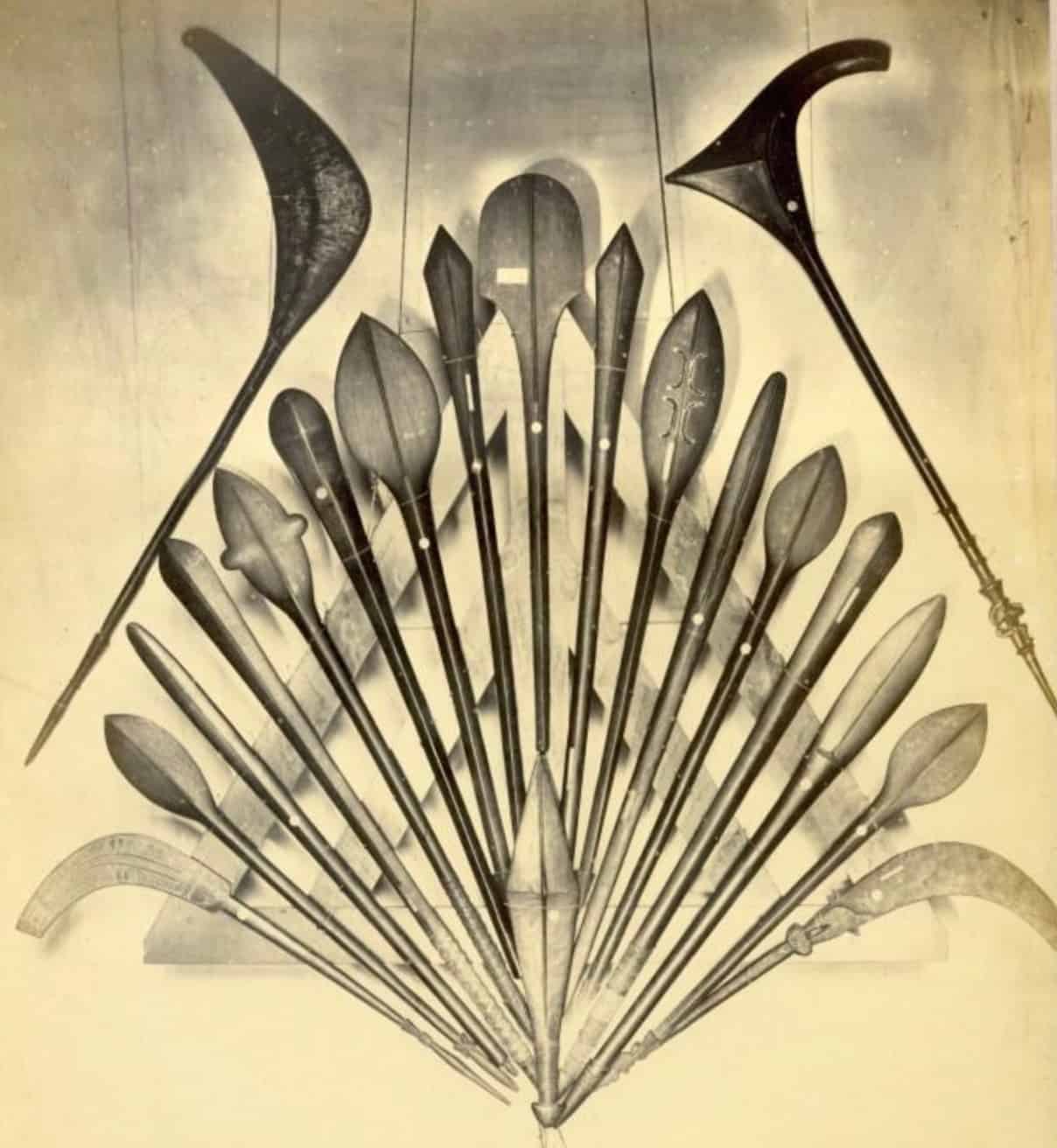 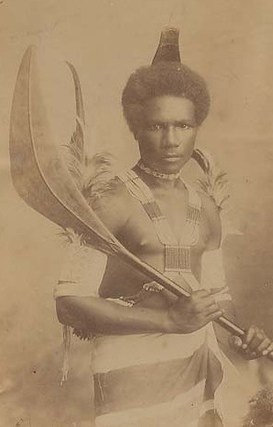 Solomon Island War clubs, in general, are less refined than Polynesian War clubs and made from a variety of hardwoods. Not all Solomon Island clubs were for fighting many had ceremonial uses.
Clubs were for skirmish warfare in close quarters and ambush tactics. Often the club was for finishing off a victim after injury by arrow or spear.

Clubs from Buka Island in New Guinea are artistically North Solomon islands. They are very collectible due to the wonderful figures found on the handle.

Even the figure from the handle alone is of some collectible value. They are usually made from Kwila or other dark hardwood trees.

Used in ceremonial dances and they are sometimes called dance paddles.

There is a variety of war clubs from the Solomon Islands. Each group of islands often had different cultures and this shows in their styles of clubs. The most common of these are paddle-like clubs. Paddle clubs are normally plain but sometimes have incised designs. 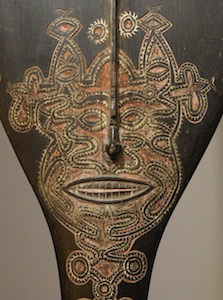 Made from heavy ironwood these clubs come from Malaita Island. They have two protuberances that are often referred to as noses. 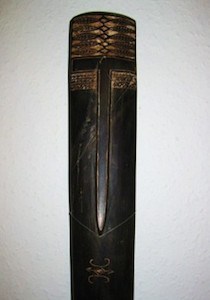 These shield clubs had a defensive purpose and were for deflecting light spears and arrows.

The type on the left called a Roromaraugi is very collectible. Value is often determined by how pretty the figure on the bottom of the shaft is.

The type on the right called a Qauata and is far more common. 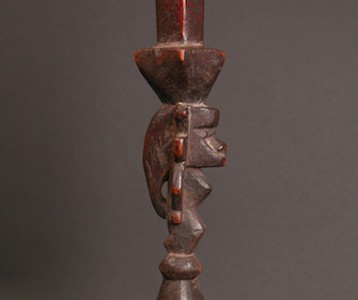 Solomon Island ceremonial batons are often thought to be a club or cudgel. They come from the Araere People South Malaita Island. The shaft is inlaid with pearl or nautilus shell and the top with a woven cane over wood. 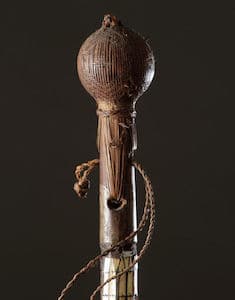 These come from Malaita Island and have a coir string binding on the handle. These were made for sale and barter to servicemen in world war II in the hundreds. Old ones are quite rare but WWII examples are very common.

These clubs are quite common but often have the binding on the handle missing.

Most serious collectors want an example that has the finely woven binding on the handle intact.

These Napa dance clubs were exclusively for a ceremony. Good examples retain the painted designs.
Great examples should have their fiber and rattle nut attachments. 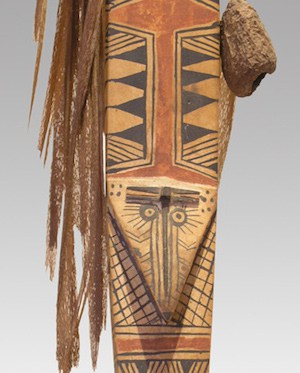 These clubs usually have eight raised lobes and a tightly woven fiber cap. There are later examples of this club made for sale to travelers. These are easily distinguished from earlier examples by the quality and intensity of the weaving at the top. Often mistaken for a Fijian Ula Club. 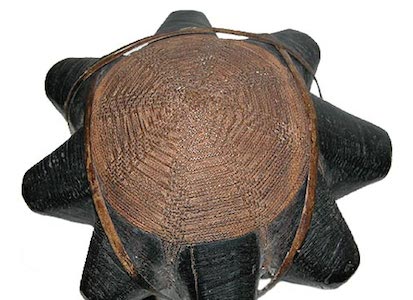 There are a variety of different clubs from New Caledonia. These first two shown here are the most common to come onto the market.

New Caledonia clubs are Melanesian but with strong Polynesian influence. The style, wood and patina often lead people to think these are Polynesian clubs.

The best-known war clubs from Micronesia come from Kiribati Island. Edged in sharks teeth attached to a wooden club by coconut fiber string and come in several different forms.

Used in spectacular ritualized fighting between the clans. Kiribati is one of the few places in the Pacific Islands to have a form of armour 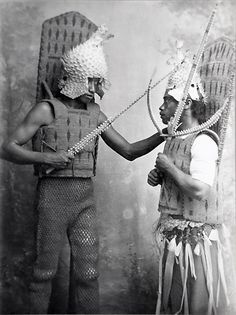 There are numerous different club styles from Vanuatu. Many Vanuatu clubs have a distinctive pommel at the bottom.
Most Vanuatu clubs a red hardwood and have a Polynesian Club Patina.
The most common form of club has four or more lobes on the top under a mushroom-like dome. Compared to other Pacific Islands there are not many collectors of Vanuatu Clubs.
Sometimes Vanuatu clubs are called New Hebrides Clubs. 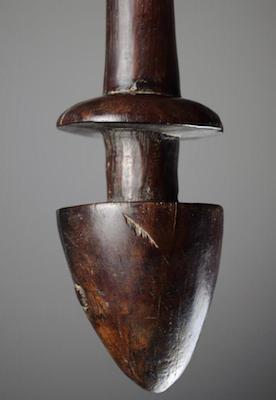 Massim Clubs were both ceremonial and for fighting. Most have surprisingly little value because there are so many of them.

There are exceptions though. The rarer types often come from the Southern Massim area.

Clubs are often made from either ebony or black palm and have a refine almost Polynesian feel to them.

Some Massim clubs were for sorcery. A club pointed at someone by a magiacian was a death sentence.

The two most valuable clubs from East New Britain come from the Sulka and the Tolai People. They both have wonderful forms and are often mistaken for Polynesian due to the quality of the finish on them.

The Sulka have other plainer more pole like clubs.

The Huon Gulf has two types of clubs neither of which was for warfare. The most collectible of these clubs for ceremonial dances by masked Tumbuwan. They are often engraved with and painted with lime.

The second type of lesser-known club (not illustrated) was for killing widows. Widows were ceremonially executed to prevent disputes over remarriage. 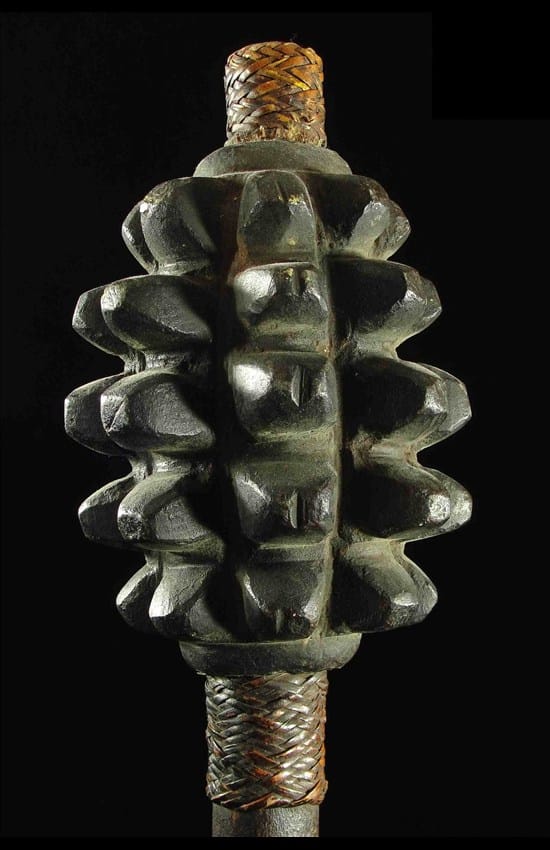 These clubs are the most common type of club found in Papua New Guinea They come from throughout much of the country. Stone headed clubs are particularly popular with the New Guinea Highlanders.

The war clubs have a variety of different shaped stone heads and it is often the shape of the head that determines the value. Complex pineapple shaped club heads are generally better than disk or ball-shaped stones.

Clubs that have the bindings and feathers intact are worth more than those without.

Damage to the stone reduces value considerably and most collectors want near-perfect examples. 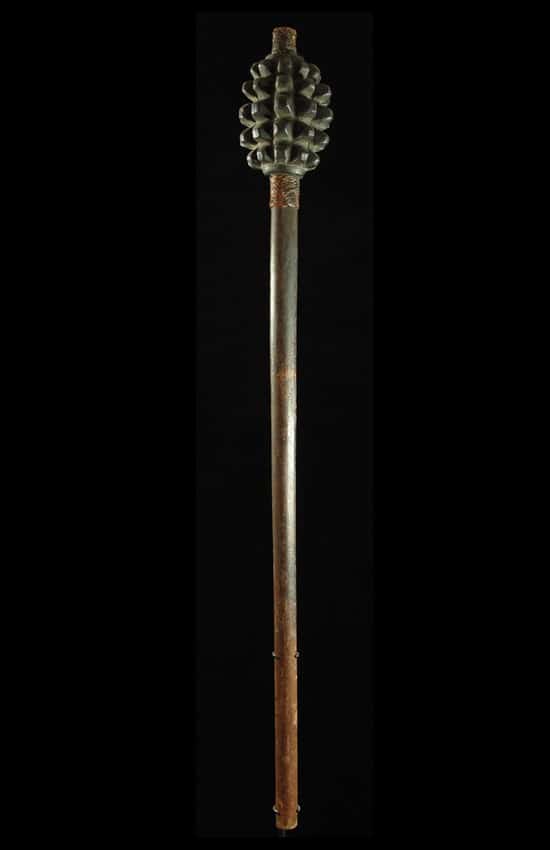 The majority of clubs from the Gulf of Papua are either undecorated or used for sorcery.

The exception is the Boti which is one if not the most collectible New Guinea War Club. They are usually made from black palm and have Gope like designs on the upper half.

Clubs used for sorcery are shorter than Boti and often pointed. They also have designs of Gope spirits or clan motifs. 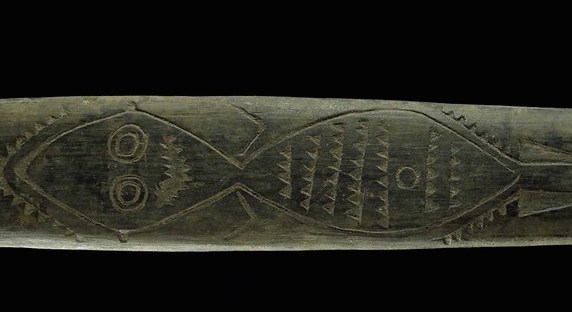 detail of a magicians club

New Ireland is one of the few places in Papua New Guinea that did not fight with spears, bows and arrows or shields. Warriors in New Ireland used slings and sling stones with deadly accuracy.
Clubs are rare and very collectible. The end of the handle is often covered in a short sharkskin grip. The top of the clubs incised with clan designs and infilled with lime pigment.
New Ireland has pole clubs and flat-topped Paddle Clubs.

The Angu are better known as the Kukukuku and are one of the only tribes to use wooden clubs in the PNG highlands. Whereas most highlanders have set battles with bows and arrows the Angu prefer vicious raids.

Kukukuku wooden clubs are sometimes mistaken for aboriginal clubs but are recognizable by their paint and lack of butt grip. 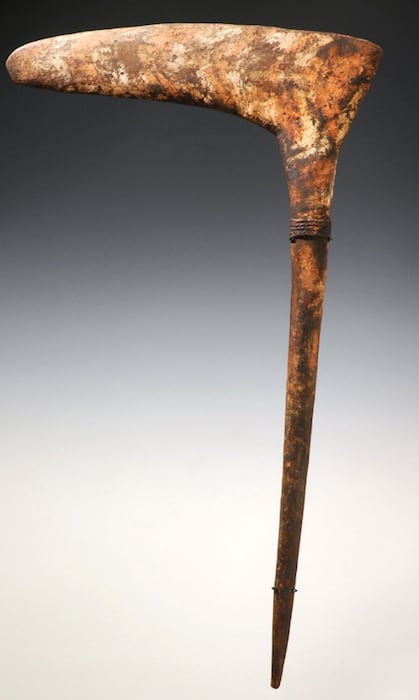 All old Solomon island War clubs and clubs from the South Pacific Islands have some value. The value of a war club depends on the beauty rarity and condition. If you have a club and it isn’t shown here please look through my articles Polynesian clubs Fijian Clubs and Aboriginal Clubs. If you still cannot find information on a club feel free to send me some images.

Please take the time and make the effort to share this article on social media. By clicking any of the share buttons below you create a link from your social site to this article. Links are what google uses to calculate what information on the web is useful. By sharing this article you are letting google know you found my article / images of some value. Thanks!