Antique Maori Wahaika and Maori Kotiate are both excellent and extremely collectible examples of Maori Art. There are however contemporary versions of this form of Polynesian art. The value difference between antique and contemporary is dramatic.   If by chance you have a good example of either a Kotiate or Wahaika I have been after one for years and would like to buy yours. If you want to know the value of a Kotiate or Wahaika feel free to contact me.
Email Me
The Maori used a variety of weapons and not just short club. For a full article on other Maori Weapons please feel free to browse. 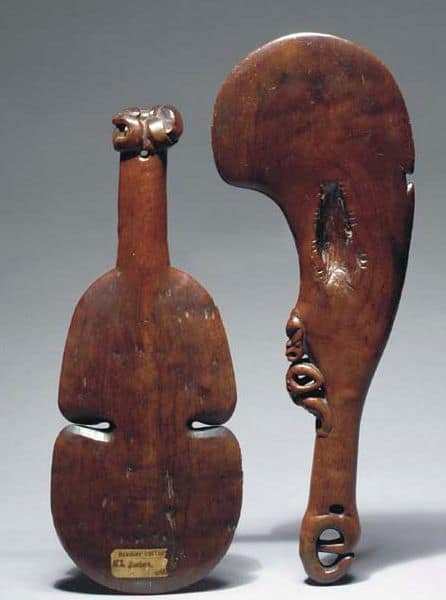 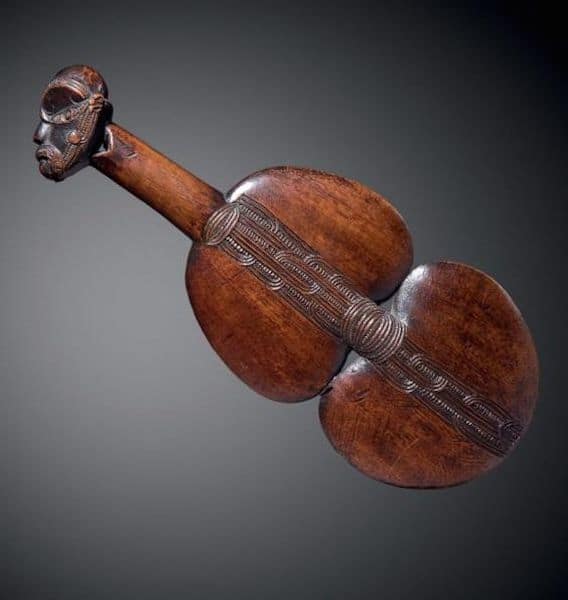 Made for sale or not this club is still collectable

The wood in contemporary versions of Maori Wahaika and Maori Kotiate tend to be from lighter timbers. The antique pieces made for smashing into people were from the hardest woods available or from whalebone. Early examples of Maori Wahaika and Maori Kotiate art are less flamboyant than newer versions. They tend not to have extensive surface decoration but rather have a beauty that comes from their form. Some old early examples made for sale to travelers still have some value. The butt terminal of wahaika and kotiate usually terminate in a mask and have a suspension hole for wrist thongs. In earlier ones this hole is square or triangular and cut through from each side. In later ones, the hole is round, drilled through from one side with European drill bits. Early examples made for sale still have collectible value due to the superb workmanship.

These wood hand clubs (Wahaika) as well as whalebone Wahaika, all have sinuses about halfway down the blade. These sinuses functioned as feather attachments as in the Kotiate. The recumbent Figure, situated forward of the handle, is useful in separating 18th-century examples from19th-century styles. In the typical 19th century examples, these figures carved in high relief, are large and often filigreed. In the 18th century examples, these figures are usually either absent or carved in low relief without filigree. Figures are much smaller in size, hardly extending above the form line.   Several Wahaika exist today collected by Captainn James Cook. It is of particular interest that none of the known 18th century Wahaika have sinuses cut into their blades. Apparently, Wahaika without sinuses are older in style.

Note figure does not protrude much or destroy shape No Sinus, Hardwood 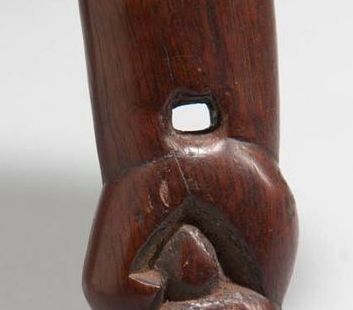 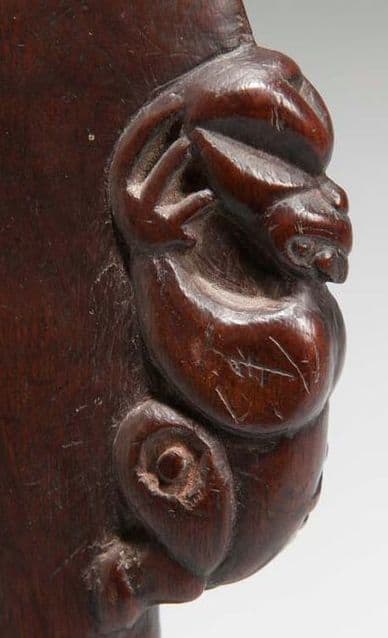 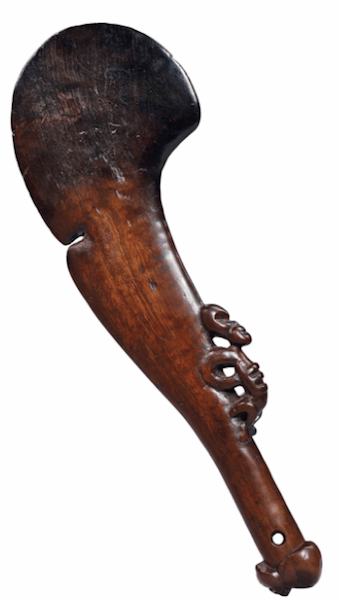 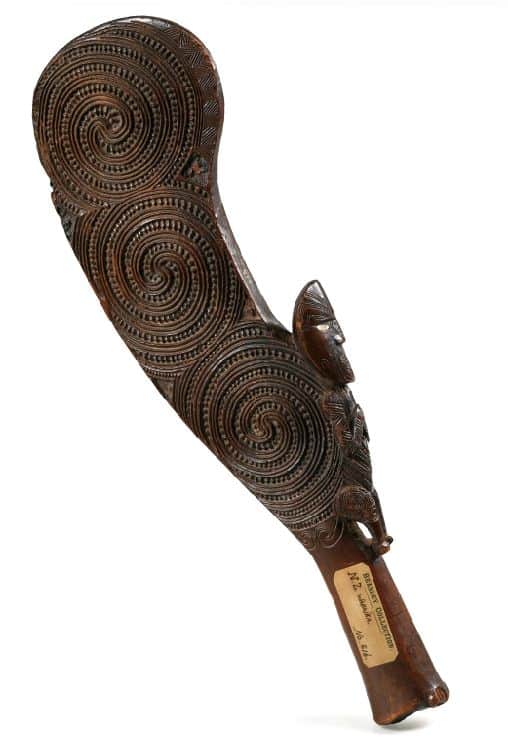 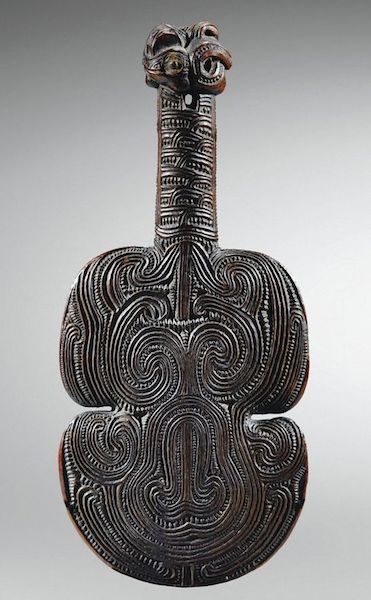 Later example made to sell but still collectible due to superb workmanship.

The feature distinguishing Kotiate from other bilaterally symmetrical hand clubs is the depressed sinus. The sinus is halfway down each edge of the blade. These sinuses were to attach feather bundles, which served in fighting to distract the adversary. Kotiate usually have masks as handle terminals just in front of which is a hole for the wrist thong, Tau.

Whalebone is cut from the pan section located behind the teeth of the lower jaw of the sperm whale. This bone unlike other parts of the skeleton is extremely strong and dense. Weapons made from it are sturdier than those of similar style made from wood.   Prior to the south pacific whaling fishery in the 1820’s – 1860’s whalebone clubs would have been quite rare. However, during the height of the whaling activity, Jaws “pans” were widely traded with the Maori. The use of whalebone in Maori weapons became considerably more widespread.

If you are planning to add a Kotiate or Wahaika to your Maori Art collection or Polynesian Art collection be aware they are not cheap. If you are after a Maori club and are not fussy about what type then a Patu would be a better alternative.   Unlike other forms of Maori art, the more intensely carved pieces are not necessarily more collectible. Like most Polynesian art the older the better. If you are after a decorative piece of Maori Art, then a Maori feather box is better value for money.   If you enjoyed this article you could also read Polynesian war clubs Aboriginal weapons or  Solomon Island War clubs

NOTES ON THE ART OF WAR, AS CONDUCTED BY THE MAORI OF NEW ZEALAND, WITH ACCOUNTS OF VARIOUS CUSTOMS, RITES, SUPERSTITIONS, &c., PERTAINING TO WAR, AS PRACTISED AND BELIEVED IN BY THE ANCIENT MAORI. 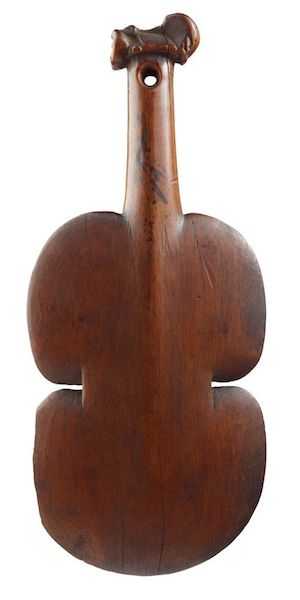 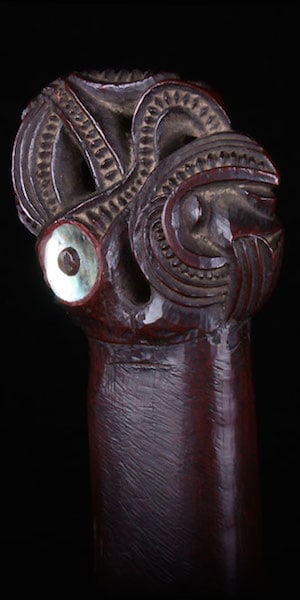 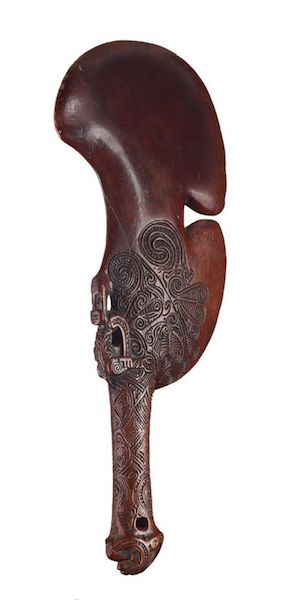 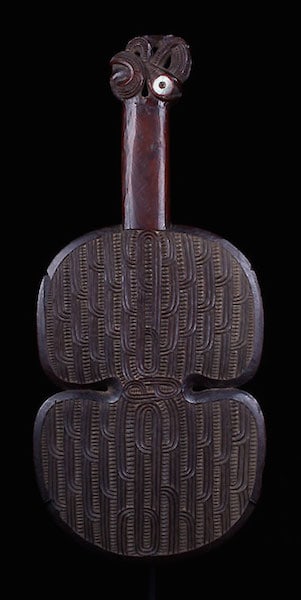 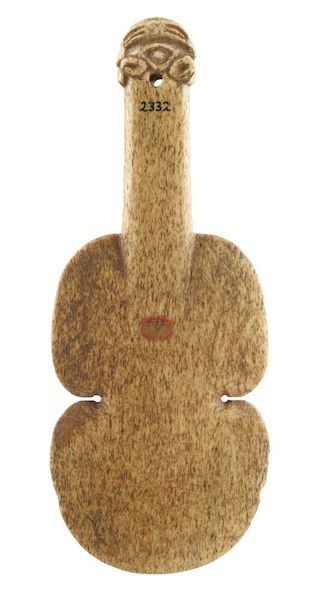 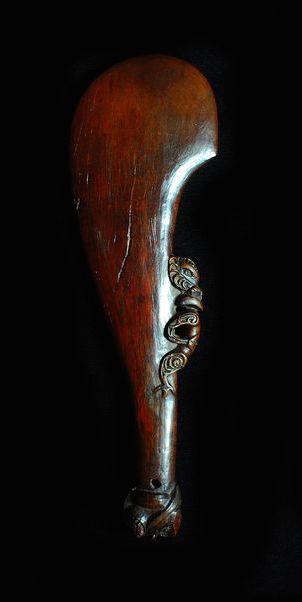 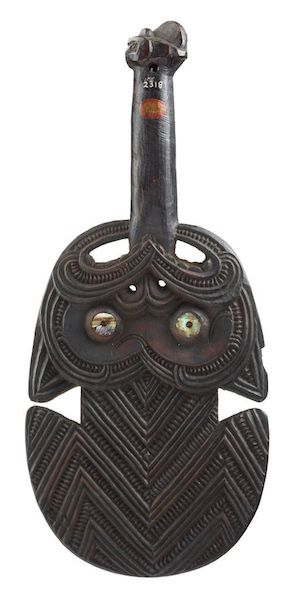 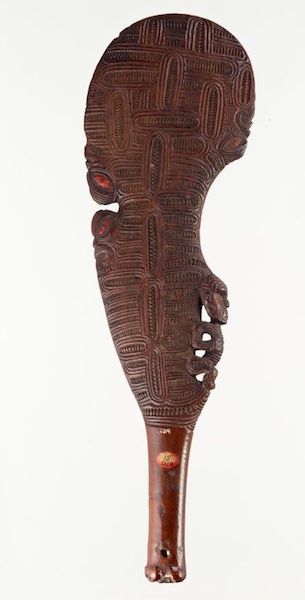 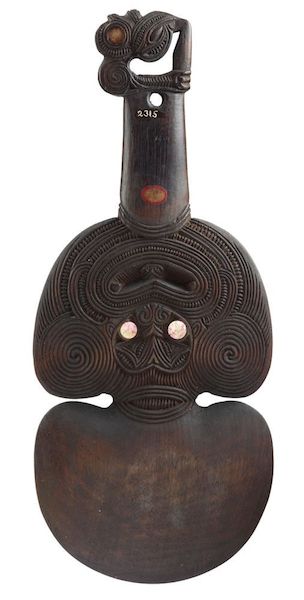 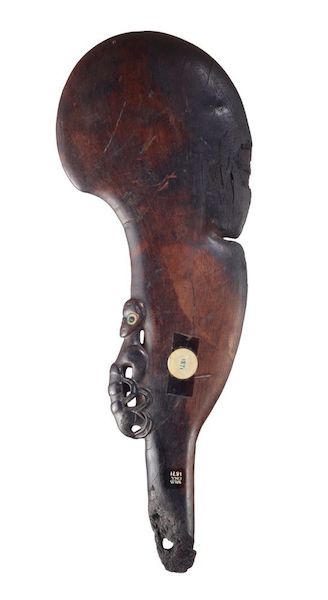 email me
Please take the time and make the effort to share this article on social media. By clicking any of the share buttons below you create a link from your social site to this article. Links are what google uses to calculate what information on the web is useful. By sharing this article you are letting google know you found my article / images of some value. Thanks!
Gallery
Home
Articles
← Papua New Guinea Carving Sepik Artifact →