The Sepik River has many different language groups and art styles. This article looks at the different styles of Sepik Carving with images to help readers identify where a Sepik Carving comes from.

I buy old indigenously used Sepik Carvings and if you want to sell a Sepik river Carving please feel free to contact me. If you have a Sepik River Carving and want to know what it is worth feel free to send me an image. I would love to see it.

Sepik carvings include Shields, Bowls, Masks and all sorts of other material culture.  This article looks at the figurative carvings. 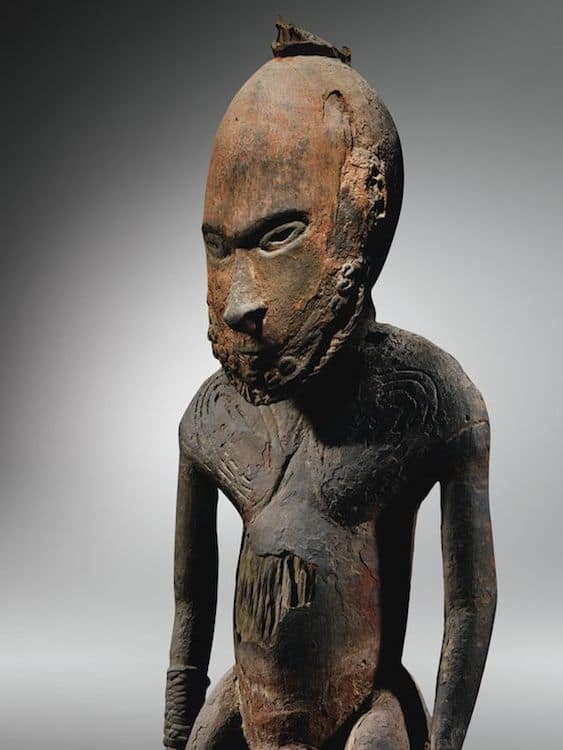 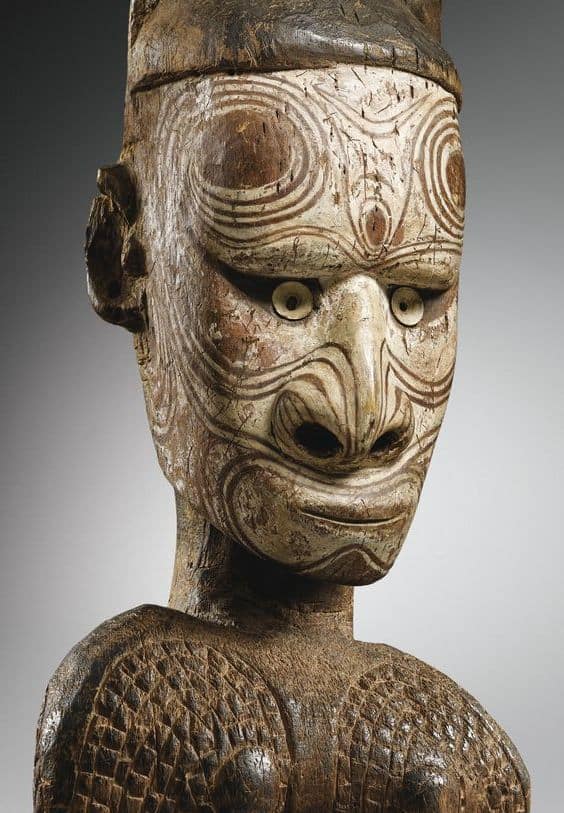 The village industry of making Sepik carvings for sale to visitors started in the early 1960′s in the Middle Sepik. Early explorers and travelers bought Sepik carving as ethnographic collectibles. When villagers sold carvings that they had created for worship they carved and empowered new figures. It didn’t take long before local Sepik carvers were manufacturing carvings specifically for sale.

Sepik carvings are amongst the most diverse group of artworks found anywhere in the world. This is because despite being a small area geographically the Sepik is culturally diverse.

The largest village on the Yuat River is Biwat. Often Sepik carvings from this area are better known as Biwat figures. The Biwat also has a well-known shield with three faces and fantastic hair adornments.

Unlike other Sepik communities, there were no permanent ceremonial houses on the Yuat River. All ritual objects belonged to extended families or individuals and were in their owner’s homes 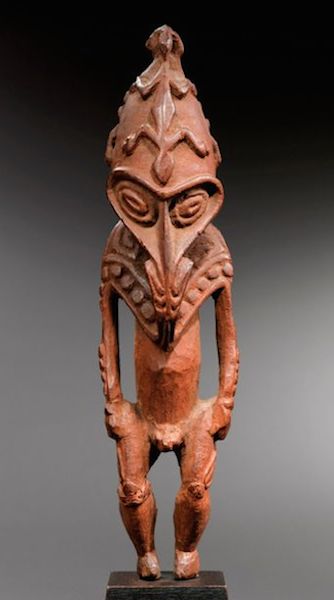 Lower Sepik carving include pieces from islands just offshore the Sepik Delta. These islands include the Schouten islands and Manum Island. The Sepik River delta and the Murik Lakes area is particularly well known for its powerful figures.

Older Sepik carving tends to have pierced nasal septums and pierced ears. The faces of the sculptures are the same as those on the masks as they represent the same ancestral deities. Figures from the Lower Ramu are also very similar because they have a very similar culture.

Lower Sepik carving should have near perfect symmetry and balance. Lower Sepik carvers valued visual precision. They aspired to be as skilled as a spider because of the meticulous complexity of spiders webs.

Abelam Carvings all have a similar looking face. Old examples have a pierced nasal septum.

Abelam sculptures are common but great old examples are not. Figures often incorporate hornbill and cockatoo heads. The Abelam are also well known for their ceremonial house decorations like lintels. 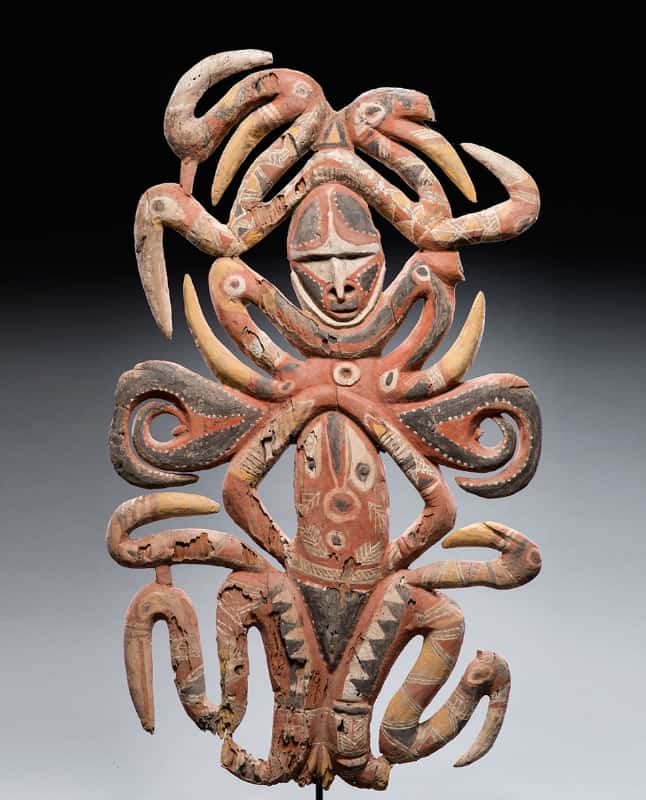 Figures from the Iatmul are perhaps the most recognizable of all the arts of the Sepik River. Sculptures are typically elaborately carved. The sculptures have painted flowing curvilinear designs. 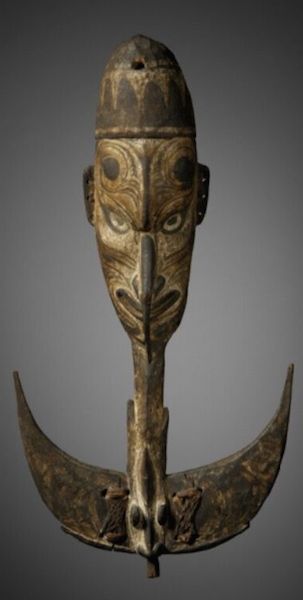 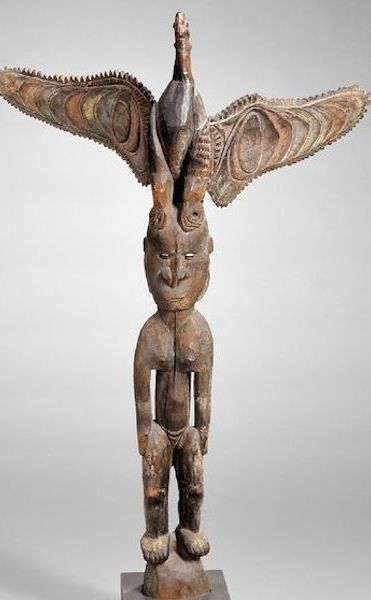 Sawos sculpture is very similar to Iatmul Sculpture. The Sawos have a close relationship with the Iatmul and share many cultural aspects. The Sawos Live just north of the Iatmul in the grasslands away from the Sepik’s floodplain. 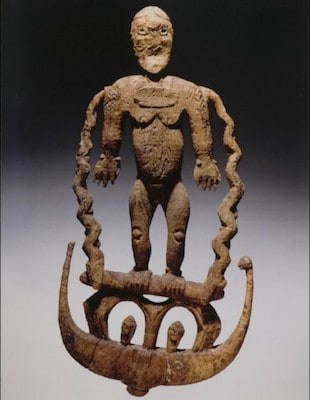 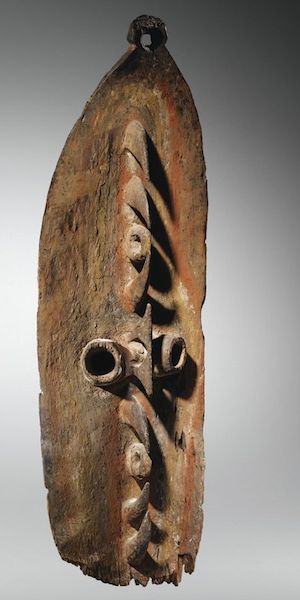 Old Hunstein Carvings are rare and very collectible. Most of the examples that come onto the market are late 1960’s made for sale examples.

The Yimam people live in the headwaters of the Blackwater River and the nearby Korewori River. They carve distinctive one-legged carvings called Yipwon.
Yipwon is a bold reduction of the human form into an almost two-dimensional plane. They stand on one leg a with hooks around a central element. This central element is the liver or soul of the Yipwon protected by the hooked ribs.
These Carvings assisted in hunting and war. After a successful hunt, blood, meat, and liver from the animal impaled to the hooks of the Yipwon figure fed it.
Each figure represented a named spirit being and stay at the back of the ceremonial house.

Chambri lakes are in the southern side of the middle Sepik. Artistically it is better known for its clay pots but did produce great Carvings.

The Carving is similar to the Iatmul and most figures from this area have pre-1960’s collection dates. 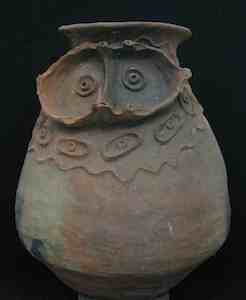 Korewari Carvings are some of the oldest figures in Papua New Guinea. Abandoned in caves for hundreds of years they have a dry eroded patina.

Figures from Korewari first came to the notice of the outside world in the early 1960s. Field collectors at that time began moving further away from the Sepik River to source more traditional art. Korewari sculptures are exceptionally rare and only about 250 of these figures exist.

Korewari Carvings are vessels inhabited by Aripa spirits who assist with hunting game. If the spirit has been correctly appeased it will track down and kill the desired prey’s spirit. When a hunter died, his Aripa spirits life ended and the Korewari sculpture left in a remote cave with the hunter’s bones.
Korewari carvings are extremely rare and highly collectible. There are a fair few fakes made for sale so buyer beware. 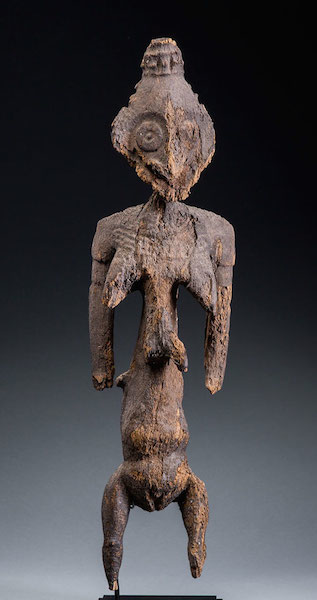 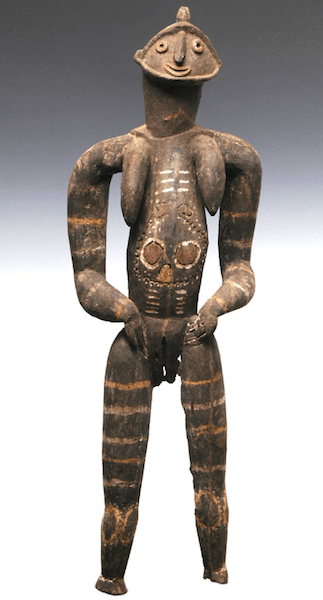 The Boiken live along the coast and in the Prince Alexander Mountains near Wewak. The most recognizable figures come from Yangoru and are usually flattish and often in a squatting position.
Best book on the Boiken is Art of the Boiken by Michael Hamson 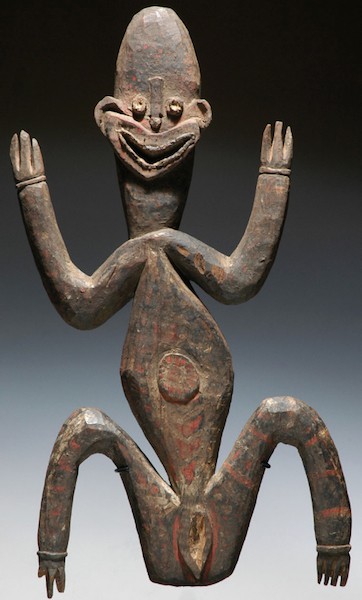 These sculptures are similar to those of the Boiken Yangaro but tend to be wider. 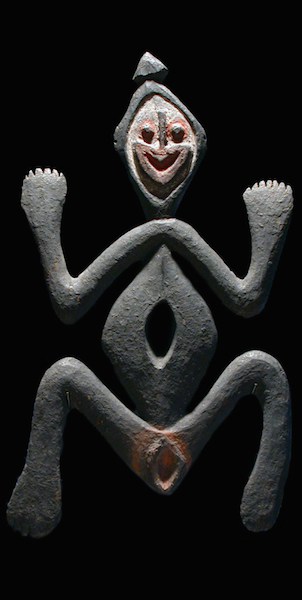 This is just some examples, so I hope you can appreciate the vast variety of Sepik Carving. The Sepik is probably the most prolific figure-producing region in the World. As Oceanic Art, they are extremely expressive and come in a vast variety of sizes forms and functions. It is a great pity that the majority of people who visit the Sepik River today only get to see the modern tribal art produced for sale to tourists. They often miss the fantastic variety of other figures this diverse region has to offer. Most collectors would prefer a small figure from the top of an indigenously used paddle than a large figure made for sale.

If you enjoyed this article you may also enjoy my article on New Guinea sculpture Pacific island masks and  Aboriginal sculpture.

Email me
Gallery
Home
Articles
If this post has been informative please take the time and make the effort to share it on social media. By clicking any of the share buttons below you create a link from your social site to this article. Links are what google uses to calculate what information on the web is useful. By sharing this article you are letting google know you found my article / images of some value. Thanks!
← Sepik Sculpture War Shields of Papua New Guinea →